Hello from your new universities coordinator!

My name is Ibtehal, and I’m the new unis coordinator at CAAT. I’m here to help students and university communities work on dismantling connections to the arms trade, and the oppressive structures associated with it.

My role at CAAT for me is a way in which I can actively engage with other passionate students and communities about addressing our responsibility (as a first step in fighting for positive change). My work on anti-arms trade stems from my passion to fight racism, and also from learning how I was fuelling the arms trade in many unintended ways. Although I’m primarily concerned with how to fight the arms trade based on my complicity, part of this involvement stems from my identity – coming from a country which the UK has colonised, bombed, armed, invaded and occupied: Iraq.

I was a student in the War Studies department at KCL (don’t judge me pls), and my anti-arms trade activism grew partly from the hostile environment that the WS department was, and partly because of the few meaningful and insightful conversations I was having with some amazing people whilst at university.

I co-founded the Demilitarise King’s campaign as part of my frustration, and also the KCL Anti-Racism Campaigning Network, which attempted to bridge all anti-racist political activism (such as fighting for the rights of migrants, climate justice, intersectional feminism). If you’d like to read a little about how students organised collectively as part of their demilitarisation campaign at King’s, you can do so here.

Universities are supposedly “progressive” spaces, but that can’t be the case when they are investing in and accepting funding from arms companies like BAE systems, Lockheed Martin, Rolls Royce and their ilk; whilst university departments make connections with ministries of repressive regimes; whilst they hang paintings and uphold statues of colonisers and mass murderers; whilst they invest in companies concerned with “security” – bodies of surveillance and policing used against brown and black folk, and the detaining and torturing of migrants, where treatment is similar to that of animals.

Arms companies appear in careers and recruitment fairs. Militarisation is celebrated – have you ever wondered why the armed forces tend to be one of the front and biggest stalls you see at Freshers? Militarisation is also celebrated at university events where militarised voices are given large platforms with no room for debate and dissent in the name of ‘freedom of speech’ – a privilege not extended to all apparently. And the case is similar within classrooms walls – curriculums and narratives are peddled to celebrate a militarism that with it perpetuates various oppressive narratives and structures.

Militarisation is an interconnected issue that not only embodies various oppressions, but is a crucial element of these different oppressions when you look at them in isolation. One college at Cambridge University for example has over £500 million invested in various unethical corporations (along with some of the world’s largest arms companies), like BP, Arconic – the company responsible for the faulty cladding in Grenfell and the Dakota Access Pipeline to name a few examples.

The fact is that universities are critical in the murder of communities, albeit in different ways; and understanding the racist structure that manifests into such oppression is crucial.

To fight for more transparency, democracy and ethics will automatically, and connectedly help the fighting for justice in other movements, bridging causes, and tackling underlying structures. Demilitarisation demands a look at all the ways in which the arms trade is connected to spaces that supposedly represent us, whilst also working collectively in dismantling the arms trade and the oppressive structures it and other oppressions are part of.

Last year students set up film screenings, events, participated in Stop DSEI!, set up campaigns on campus, and confronted their universities. CAAT wants to help and support students in whatever way we can; we can do this mainly by providing resources, compiling research, planning campaigns, holding workshops and events.

To campaign against the arms trade is to do the bare minimum in terms of solidarity; our thoughts, prayers but also actions need to be with those oppressed and fighting for freedom in our local, national and international communities. To fight against and resist the arms trade is not only to fight for an end to connections with companies like Elbeit Systems, but to fight against the oppression and killing of all oppressed communities, against the policing of black and brown bodies, the horrific treatment of migrants, the dehumanisation, commodification and exploitation of communities, and to fight injustice wherever and in whatever form it takes place. It is a crucial step in fighting for justice, and justice will prevail. 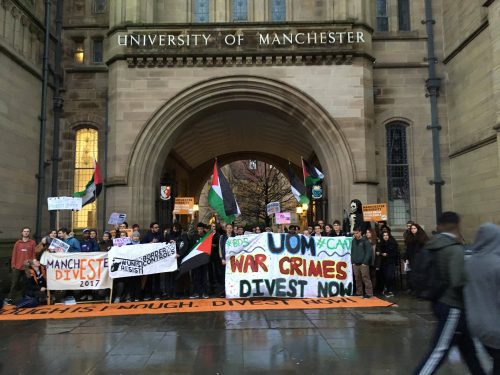 Get involved. Get in touch.