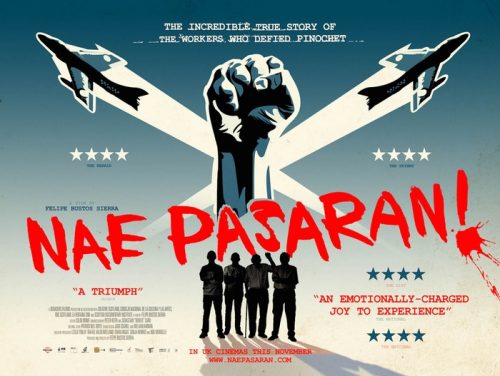 Join the People’s Film Club from 7pm for an exhibition of Chilean art by Bordando Por La Memoria, a collective of first and second generation exiles from the Chilean community whose work remembers the disappeared and politically executed in Chile.

After screening the BAFTA-winning Nae Pasaran, we will be joined by John Keenan of the East Kilbride workers, along with two contemporary Chilean activists, Rossana Leal and Isabel Cortes,  – chaired by the brilliant Seb Aguirre of LGSM and Ice & Fire theatre!

It’s going to be a brilliant night, celebrating the power of solidarity, all while raising money for the Agrupación de Familiares de Detenidos Desaparecidos (the group founded by the family and friends of the disappeared in Chile), alongside Bordando Por La Memoria and the workshops of Arpillera-maker Maria Alicia Salinas Farfan.

We can’t wait to see you all tomorrow. Grab a ticket if you haven’t already, and solidarity forever ✊