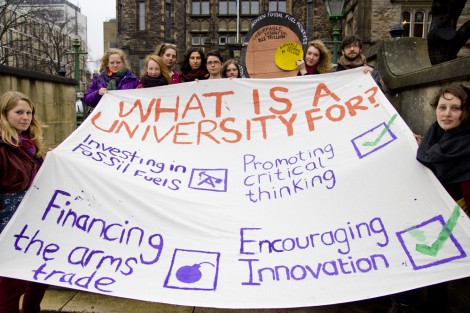 Many UK universities invest in arms companies, often without the knowledge or approval of their students, staff and beneficiaries.

Investments may be direct (by holding shares in an individual arms company such as BAE Systems), or indirect (e.g. by investing in an investment fund which itself invests in arms companies). This provides some financial support for the arms trade and sends a message that arms companies are legitimate companies with which to do business, despite the devastation caused by the arms trade.

Investment successes have been won at Leeds, UCL, Queen Mary, SOAS, Manchester, St Andrews, Goldsmiths and Bangor. And the more universities that divest, the more of an impact we’ll have!

Why do universities invest in arms companies?

Universities invest in arms companies for many reasons, and this could be an interesting topic for a debate on your campus. Many arms company share prices have risen following 9/11 and the “war on terror”, universities face increasing financial pressures, and universities want to maintain good relationships with companies from whom they receive research funding. Also, without pressure from students like you, there may simply be nothing stopping them from doing so.

Why should a university divest from a company like Rolls Royce, who gets the majority of its profit from civil projects?

Universities shouldn’t invest in any companies which facilitate the devastation caused by the global arms trade. Rolls-Royce, for example, is a massive manufacturer of military aero engines used by about 160 armed forces globally, including Saudi Arabia and United Arab Emirates. The fact that they also have civilian projects shouldn’t get these companies off the hook!

Is it financially viable or advisable to divest?

Divestment is financially viable; a number of universities have already set an example through divesting (e.g. St Andrews, Goldsmiths, Bangor and SOAS). The adoption of an ethical investment policy has also proved possible (e.g. Bangor).

Will divestment make any difference to arms companies?