Bloodhound SSC is an engineering project that aims to break the 1000mph World Land Speed Record with a rocket-propelled car. Since starting in 2008, the project has been widely praised for its ambition and technology. However, an interview given by the project’s Senior Design Engineer  in April this year suggests that the project was only set up to address a skill shortage within the military. Besides that UWE is heavily involved to serve the military, drawing on the recently published “Arms to Renewables” report by Campaign Against Arms Trade (CAAT), I highlight broader implications for employability and sustainability.

Bloodhound SSC describes itself as a “global Engineering Adventure, using a 1000 mph World Land Speed Record attempt to inspire the next generation about science, technology, engineering and mathematics (STEM)”. This project benefits from the support of two academic institutions: Swansea University and UWE Bristol, both of whom are among its founding partners. UWE is “taking a centre stage in the development of Bloodhound SSC” and the university is a proud promoter of Bloodhound, through the UWE Bristol Strategy 2020, annual lectures, and large advertisements on buses and prominent billboards in Bristol and beyond.

Bloodhound’s glossy image was first challenged last year when I sent an open letter to Longhurst asking how a “rocket-powered supersonic car” consuming “40 litres of High Test Peroxide fuel, every second” could possibly be thought as sustainable. The letter also emphasised that the project is funded by the Ministry of Defence (MoD)* and largely based on military technology. The request for a public reply was never answered by UWE. Bloodhound SSC was then later highlighted by student campaigners during protests against DPRTE 2013, the “military business and arms fair” that took place for the second time on campus in November last year.

However, an interview given by Mark Elvin, the project’s Senior Design Engineer to the Wheel Men radio show in April sheds a new light on the origins of this project. According to Elvin, Richard Noble, the man who initially inspired the project and now directs it, pitched his project to Lord Drayson, then boss of the MoD’s procurement centre (right next to UWE’s Frenchay campus). And he was dismissed. It seems only once Drayson realised how Noble’s idea could serve the military that it was supported. 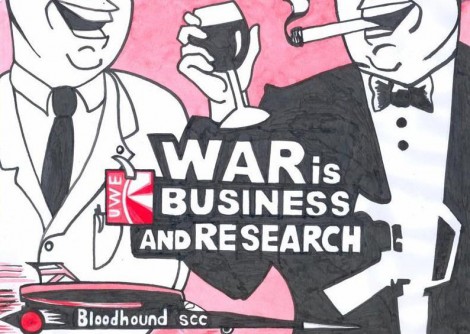 In Elvin’s words, the MoD “was suffering a skill shortage within the armed forces. So, not enough skills, technicians, engineers, etc. to go into the armed forces. So [Drayson] said: you can help me. How are we going to sort this problem out? And Richard [Noble] said: give me those jet engines, and we’ll do a land speed record project with an education programme. And the whole existence of the Bloodhound project is due to this education programme.”

According to the recently published “Arms to Renewables” report by Campaign Against Arms Trade (CAAT): “Spending vast amounts of money on military procurement (…) doesn’t enhance security: it fuels conflict (…) and makes the world a more dangerous place”. Most importantly, CAAT’s research argues that funding renewable energy – such as offshore wind and marine energy – would simultaneously decrease conflict and contribute to tackle the climate crisis, while creating many more jobs for students graduating with a STEM degree.

University Director of Marketing and Communications Keith Hicks commented that the reason this project was embraced by UWE is because the university“saw it at the time as a particularly inspiring project for our students and to attract prospective students to go into engineering. Essentially there are more careers and jobs out there for engineers than there are graduates to do careers in engineering (…) It means our graduates get high employment rates in good careers.” That may be true, but CAAT’s research suggests that should UWE have supported a renewable energy project instead of one with the military, not only would it have not contributed to fuel conflict and tackle climate change. It would have also helped to build a sector that produces, for a given investment, many more jobs in similarly good STEM-based careers, without undermining the employability prospects of students determined to work for the military.

Sam Robinson, coordinator of CAAT’s student network said the following: “Bloodhound SSC gives legitimacy to the destructive arms trade by presenting the project as inspirational and exciting. Universities like UWE should not be acting as recruiters for arms companies or the military, especially when those skilled STEM graduates are needed in the renewable energy sector.”

Governments decide how to channel public funding and institutions such as UWE can choose which project they set up or join to inspire students, improve their students’ employability, to further their specific research objectives, or to grow partnerships. They also have a broader societal responsibility for the strategic decisions they make. As far as sustainability goes, UWE claims to adopt a “holistic approach” to Education for Sustainable Development, a UNESCO programme aiming to “sow the seeds of tomorrow so that future generations can inherit a more sustainable world”. Yet, as an institution, UWE is heavily committed to Bloodhound, a rocket-propelled car openly serving the interests of the military; an approach that, many say is fundamentally unsustainable, as well as detrimental to our economy and the wider society.

So, do you believe it was appropriate for UWE to become a partner of Bloodhound? Do you think Bloodhound can make any claim to sustainability? Furthermore, should educational institutions such as UWE invest in projects directly furthering the military? Since there is no question that Bloodhound is a ground-breaking project of its own, what other similarly extraordinary project could UWE support? And would you rather work for a sustainable company or for the military? Let us know what you think here, or on twitter (#UWEdebate #disarmUWE).

To learn more and get involved: