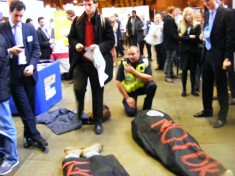 Bristol students, including a number of Student Union officers, protested the presence of Barclays at their Autumn Careers Fair last month.

Read more about the action here.

I spoke to one of those involved in the protest:

Why did you take action at the careers fair?

To raise awareness of the investments and activities of companies active at University careers events and promote debate. It’s vital that students are made aware of the activities companies they may go on to work for.

What happened at the protest?

Myself and one other elected officer staged a die-in with fake body-bags and rape alarms by the Barclays Capital stall. We attempted to hand out leaflets explaining the action and offering further info, but were prevented by security. We left after about 2-3mins, cooperating with security.

Can you tell me a little about what Student Union legislation you are currently working on and why you think that it’s important?

It’s a delicate argument to be made, particularly as I have to try and be as representative of as many students as possible. I believe that at the very least students have the right to protest their moral objection to companies endorsed by the University at careers fairs, and explain their reasons for objection to others. In turn, students also have the right to be informed independently about companies attempting to recruit them.