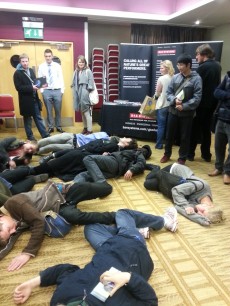 Students at Warwick held a dramatic die-in at their Careers Fair. Below is an account of the action by Jac Bastian, coordinator of Weapons out of Warwick.

On the 11th of October the University of Warwick hosted a Careers Fair with BAE Systems and Rolls Royce Plc in attendance as well as Barclays and HSBC. In addition to arms companies and investors there were other companies with dubious ethical records including Coca-Cola, Atos and Nestle.

Weapons Out of Warwick, along with Warwick People and Planet Society, put together a booklet entitled “Fair Information”, which highlighted the ethical records of the companies in attendance. A group then printed and distributed these at the entrance to the fair, allowing students to make a more informed choice regarding prospective employers.

We also felt it necessary to make a more direct point to both the university and to the arms companies that the presence of companies like BAE is not welcome with many students. Therefore, at 3pm we held a “die-in” within the fair itself. This was a conscious attempt to theatrically manifest our condemnation of these companies and consisted in about ten of our membership screaming and falling down ‘dead’ simultaneously right in front of the BAE Systems stall. One of our membership then explained in clear terms what we were doing and why. We then remained on the floor for about 5 minutes, forcing fair attendees to step over our bodies to be able to continue around the fair.

After an extended exchange with University security in which we re-stated our aims, and in which we advised them that if they didn’t want future disruptions of this sort to desist from inviting the sort of companies whose apparent aspiration is to make the mass extermination of human life a more real and accessible prospect, we left of our own volition.