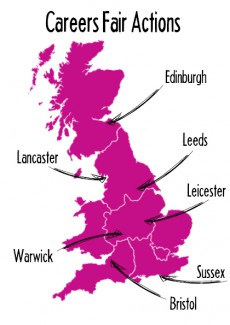 It’s been bad term for arms dealers trying to recruit on campus. Here’s a round up of some of the actions that took place:

What: Die-in at BAE stall

“BAE has a horrific human rights record, having sold arms to Indonesia, Saudi Arabia, Israel, Turkey, Zimbabwe, Tanzania, Algeria and Qatar. The company produces everything from nuclear submarines to the handcuffs and shackles used at Guantanamo Bay. The fact that they are here, at this respected institution, lends legitimacy to human rights abuse. We are here to say that this is not okay.”

“I think it is ethically unacceptable for a company such as BAE Systems to be allowed onto campus. We wanted to send a clear message that companies with no regard for human life are not welcome here.”

Where: University of Leeds

What: BAE stall doused in blood (see the video here)

“Making a profit from corporations associated with such blatant social and environmental injustice is unacceptable, immoral and contradictory to our University’s own ethical codes. The University of Leeds should firstly be investing money into corporations that work to build a better world, rather than profit off its destruction, and secondly encouraging its students to consider the ethical implications of their future employment. Our actions against BAE are an attempt to make the University consider its unethical policies and hopefully enact positive change accordingly; we therefore call on the University to respect the democratic referendum of the students in 2013, which voted to remove BAE Systems from promoting its shameful cause on campus.”

Where: University of Warwick

After being dragged out the reapers commented:

The way we were (literally) handled exposed some of the knee-jerk panic the University reacts with time and time again to any kind of statement against its blatant corporate agenda.

“In that sense, we owe the university our thanks. Thank you for vindicating our cause and strengthening our resolve to it. You cannot know the power you have released in us, but we’ll be happy to show you.”

Where: University of Bristol

What: Die-in at BAE stall

“This involved a large group of students entering the fair together and collapsing onto the ground, pretending to be dead, in front of BAE’s stall. They were quickly escorted from the Great Hall, where the fair was held, by university security. They also ran their own stall over the two days of the fair to provide alternative information about the arms companies present, including Thales and Airbus Group (EADS) as well as BAE.”

‘Engineering graduates are in high demand and there are many jobs in the renewable sector, which is a much more vibrant area’

Where: University of Sussex

What: Die-in against Thales (pictures here)

Where: University of Leicester

What: Protest and leafleting against the presence of Thales

Where: University of Edinburgh

What: Protest and leafleting against BAE’s presence