Rolls-Royce, which produces military aircraft engines and earns 23 per cent of its turnover from arms, invested £4,730,924 in the University last year only. BAE systems, which is the world’s third largest arms producer, invested £1,113,859. Around 94 per cent of BAE systems revenue comes from the sale of arms.

A spokesperson for the University of Sheffield said: “The University has several innovative research partnerships with international companies, including Rolls-Royce, BAE Systems and Boeing, which bring major benefits to students, allow us to offer a unique education experience and also drive important research projects to overcome the world’s toughest challenges.”

Interesting definition of the ‘world’s toughest challenges’ there.

“Sheffield students have long demanded the University of Sheffield cut ties with arms companies and I wholeheartedly support that, considering there is a legitimate academic freedoms argument to be had.”

“As is Union policy, the Union does not support any involvement with arms companies, whether promoting them at careers fairs, being funding by them or academic resources being used to support their aims.”

“When arms manufacturers are bankrolling universities, whose interest do you think research will benefit? 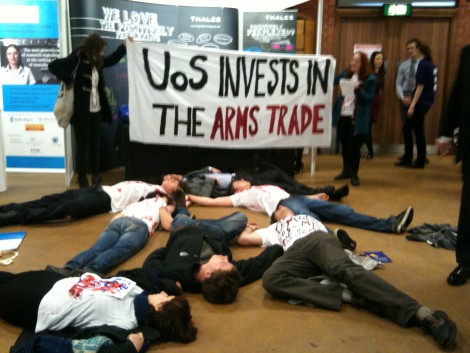