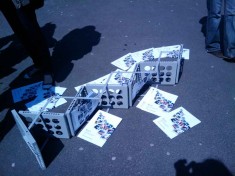 Careers fairs provide the perfect opportunity to disrupt the arms’ industry’s sordid trade, and students in Sheffield have tried a number of different methods in our attempts to scupper their recruitment process. From banner drops to die-ins, all manner of approaches have been employed, but for me the most effective strategy is simply to dismantle their stalls, hijack their leaflets, and prevent them from doing what they are there to do.

The university held an event boasting stalls from BAE, QinetiQ and Rolls Royce, among others. At a planning meeting beforehand, we decided that given the high number of objectionable companies at the fair, the best result would be had if the stallholders were no longer able to operate after our ‘visit’. Research was done into the layout of the fair, using maps freely available at the event, and we highlighted which stalls we were going to target. We decided to operate in groups of three, and this proved to be a good number – three people, working without restraint, can shut a recruitment stall down in about a minute.

On the morning of the fair, we convened in a local park, divided into groups, and equipped ourselves with enough bin bags to carry all of the offending literature. Dressed and acting as inconspicuously as possible, we entered the fair in our groups, and sauntered over to our assigned stalls. After a little confusion about when we were to start proceedings (it’s probably best to start when you are ready, and not try to coordinate exactly with other groups), we began the task in hand. We approached the stand (QinetiQ in our case) and told the startled stall-holder that we’d come to help him close down for the day. At which point, one member of the team held the bin bags open while the others rapidly swept and flung any leaflets, giveaways and gimmicks in sight into the bags. When the table was clear, we began to pull the hoarding surrounding the stall down, with varying degrees of success, and fortunately noticed two full boxes of recruitment leaflets under the table. We grabbed these boxes, picked up our bin bags, and headed straight for the exit. As soon as we breached security, a member of our group armed with a megaphone began an attention-grabbing tirade against the motley crew of arms’ companies at the fair.

Back in the park, we recycled the leaflets, distributed the complimentary mugs amongst ourselves, and nominated someone to send a press release with photographs to the student newspaper.