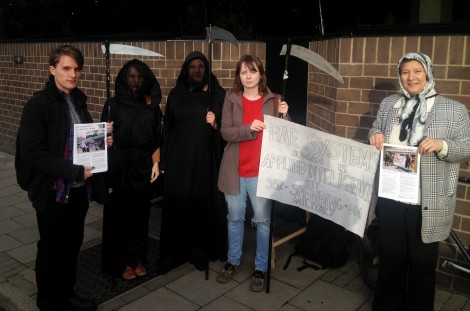 Campaigners and activists from across Cambridge came together this month to protest against arms companies recruiting at an engineering and science jobs fair. The two day event at the University of Cambridge included arms companies BAE Systems and Rolls-Royce, as well as the army; recruiting on Armistice Day.

BAE Systems and Rolls-Royce both supply arms to war zones and oppressive dictators, making them complicit in human rights abuses. Even during the protests BAE Systems’ Eurofighters were bombing civilians in Yemen. They have also both been investigated for fraud or corruption.

Many people were appalled that the University was hosting these companies and promoting them to students as legitimate, morally neutral career options, especially on and around Armistice Day.

Cambridge Stop the War, Cambridge Defend Education, and Campaign Against Arms Trade made our opposition known. We gave out information, met with careers service staff, and took direct action against the arms companies exhibiting.

Grim reapers stood by the entrance to the fair, highlighting the “careers in killing” being promoted inside, and ensuring those entering were aware of the unethical nature of the arms companies exhibiting.

Several student activists went into the fair to engage with the people recruiting for the arms companies. This was one way to expose and draw attention to arms business, as the companies weren’t drawing attention to it themselves.

When recruiting, these companies try to hide or gloss over the civilian deaths and human rights abuses their products cause. One person who went in to the fair said

“The BAE stall in particular was set up to cynically seduce and mislead students. Several of those I met who were interested in BAE had little or no idea that 95% of their business is about making the next generation of killing-machines.”

We took action because we feel that students should have access to all the information they need to make informed career choices. This is not possible if the careers service give arms companies a platform to promote themselves unchallenged.

Two of the protesters met with the director of the University’s Careers Service, who is aware that many students oppose the presence arms companies on campus. Any other Cambridge students who also oppose arms companies recruiting on their campus are encouraged to write to the careers service.