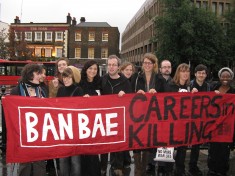 Two weeks after the launch of Campaign Against the Arms Trade’s new Ban BAE counter-recruitment campaign, students and anti-arms trade activists kicked off the academic year by taking over a BAE recruitment presentation and staging a die-in at their stall.

The action took place at the Guardian’s busy Graduate Fair held at the Business Design Centre in north London and saw 15 young people, including students, CND supporters and Quakers, making a strong but peaceful statement against the unethical activities of BAE – the world’s largest arms producer.

There was heavy handed treatment of the protesters by the security services at the event, activist Anna Clark was dragged away by her arms, while at least one other protester was pulled by the feet. It seems as if the security at the fair were expecting protests against BAE, in the afternoon the stall area opposite BAE was occupied not by an exhibiting employer, but two security guards keeping watch.

BAE Systems sells arms to countries the Foreign and Commonwealth Office’s Human Rights report classes as “major countries of concern”. Notable customers include Israel, Saudi Arabia, Pakistan and Indonesia. BAE arms sales in several countries have been investigated by the Serious Fraud Office (SFO) and allegations of corruption have dogged the company for years. In March 2010 BAE agreed to pay a $400 million criminal fine to the US Department of Justice.

The company is keen to recruit university graduates, especially in engineering and sciences. Each year they spend thousands of pounds on recruiting staff to research, design, build, market and sell the next generation of killing equipment.

But students are increasingly voicing their distaste for the promotion of careers in the in the arms industry by supposedly ethical organisations, like universities and The Guardian. CAAT has identified over 40 careers events in October and November 2010 where BAE or other arms companies will be present. Student activists are being urged to ensure that BAE is met with campus protests every time it participates in career fairs or other recruitment events.

Hannah Brock, a Quaker, explained, “I was glad to do something public in support of a campaign that makes people contemplate who they give their skills to”.

Hilary Aked, who interrupted the presentation, told Ekklesia that she was motivated by her recent work in Palestine. She pointed out that BAE sell weapons parts to Israeli forces.

“I can see for myself the effects of Israeli military actions, having just returned from Palestine,” she explained, “They’re using expensive military equipment to violently suppress peaceful protests”.

“We significantly disrupted the BAE presentation and stall. It was encouraging to see how many students were receptive to our message about BAE and the unethical career choices they offer to graduates. We hope that The Guardian, which has done so much to expose BAE’s shady activities, will exclude BAE from future Graduate Fairs.”