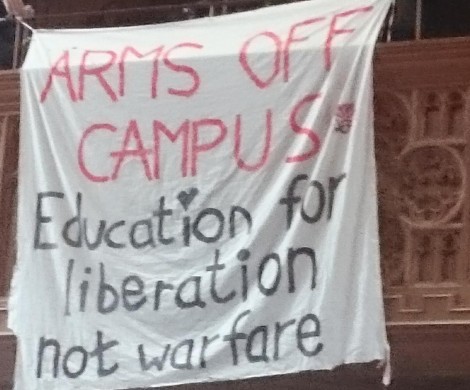 Last week students in Bristol took action against arms companies recruiting on their campus. Several arms companies were exhibiting at an IT and Engineering careers fair in the University’s Wills Memorial Building, but the Bristol Left society were there to counter them with a banner drop and an information stall.

The action was a protest against the presence in universities of arms companies who sell arms and profit from the use of weapons in conflicts and by governments the world over. Students handed out leaflets about the unethical practices of companies at the fair, which included BAE Systems, QinetiQ, Airbus and Boeing, and then dropped a banner reading “ARMS OFF CAMPUS. Education for liberation not warfare” from the balcony inside the fair.

“The world would be a better place without arms trading companies, and students should be encouraged to avoid them. The point of an education establishment is to give young people the knowledge to be able to pursue careers that change the world for the better, rather than encouraging them to do jobs that are unsustainable, destructive and unethical without them even knowing the true implication of their work.”

BAE Systems is the largest arms manufacturer in the UK, and their weapons are sold indiscriminately around the world, including to dictators, human rights abusers, and countries at war. Their products have been used to suppress peaceful pro-democracy protests and to support the Saudi air force in their bombing of Yemen. They have been investigated by the serious fraud office for dealings in at least 8 different countries.

“At a time where we are seeing the devastations of war, and the refugee crisis, seeing arms companies represented and welcomed is outrageous. The companies are profiting from warfare, and all its suffering, and we shouldn’t let that happen.”

University careers fairs are where arms companies recruit graduates to design, build and market the next generation of weapons. But many students feel that universities should not be helping arms companies to recruit by hosting them at careers fairs. But as one student commented: