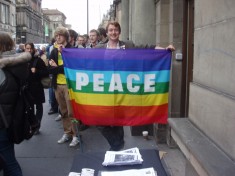 Report on the recent action in Edinburgh:

Once again we returned to Edinburgh University to flyer students heading in to the careers fair about the presence of arms companies on campus, as we had already discovered that the arms companies BAE Systems, Thales and Selex would be attempting to recruit students inside the fair. We had a generally positive response from students, many expressing surprise that arms dealers would be present inside, especially considering the role of British arms companies in arming dictators such as Libya and Egypt prior to the Arab Spring. We even got a good number of sign ups to our petition.

Whilst we were there, several student groups entered the careers fair to protest the presence of unethical companies on campus, including a group from Students for Justice in Palestine who cleared out all promotional materials from the BAE Systems stall, and replaced it with information about the company’s unethical activities in Israel and Palestine.

Disrupting unethical company recruitment at the Edinburgh University careers fair is becoming a real tradition, with greater numbers and a more diverse range of groups taking part each year. We’ll keep going back until arms dealers realise they are no longer welcome on campus.