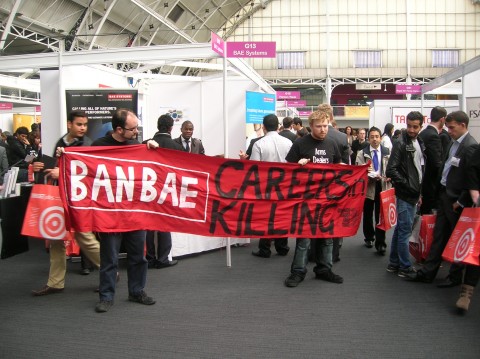 A group of activists entered the Fair and quickly identified the BAE stall. After changing into ‘Arms dealers →’ t-shirts, the activists stood in front of the stall and unfurled a banner which read ‘Ban BAE: Careers in Killing’. One activist shouted to the student attendees about why arms companies shouldn’t be at the fair whilst others gave out leaflets. Leaflets were also given to those waiting in the queue to enter the fair.

The action was part of the Ban BAE: kick arms companies off campus campaign. The Ban BAE campaign aims to end arms company recruitment on campuses. The recruitment of skilled graduates is essential for arms companies to continue to operate and as a result they spend huge amounts of money annually on visiting universities and recruiting students. Activists at the London Graduate Fair hope that non-violent but disruptive protests like theirs will make it financially unfeasible for arms companies to continue to recruit students at careers fairs. They also believe that if more students had the full information on arms companies, less would be willing to work for them.

One of the organisers of the Fair was the Careers Group, which is a provider of careers services for many London students. Students across the UK are telling their careers services that they don’t want to see arms companies recruiting at their universities. This is the second year that the Campaign Against Arms Trade (CAAT) Universities Network has protested this event; the activists involved hope that it’s the last.

“Arms companies need to recruit graduates in order to survive. By disrupting their careers events and teaching students about their practices we can do real damage to these companies.” 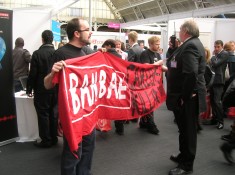 The fair had high levels of security; each person’s bag was searched on entry and police were present. Once the banner was unfurled, security and the police moved quickly to remove the protesters from the room. With the additional security measures affecting the smooth running of the fair and costing money activists are asking why the Graduate Fair doesn’t simply stop inviting arms companies to their events.

Chris Rossdale, a student who travelled down from the University of Warwick for the action, said

“The London Graduate Fair showed its priorities when it conspired with the police to forcibly eject us for simply informing students about the nature of companies represented at its event. Sadly, blood money trumps freedom of speech.”

The action was also reported on the Ekklesia website. Read their article here.