Last week two of the world’s largest arms companies gave a talk at the University of Liverpool.

About 50% of Thales’s business is in arms, including mortar systems, rocket systems for helicopters, precision-guided munitions, military vehicles, missiles, and small arms and ammunition. They sells arms to many oppressive regimes, including Bahrain, China, Egypt, Saudi Arabia, Turkey and UAE, and collaborate with Israeli arms company Elbit to develop drones.

Both companies held a recruitment event at the University of Liverpool, but students were there to hold them accountable. Jamie Smith writes his report of what happened, and the awkward questions that were asked. 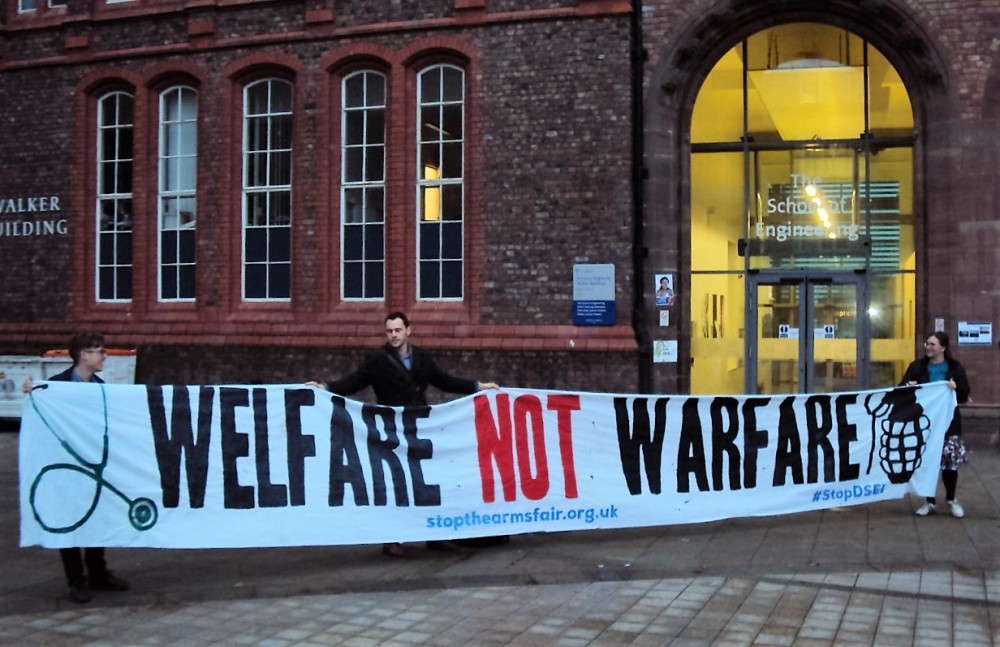 CAAT Liverpool members attended the Engineering Insights lecture where representatives from weapons manufacturers Thales and Rolls-Royce gave a careers talk aimed at students and graduates. With an underlying theme of secrecy the event was advertised directly to science and engineering students by email with no public announcement.

The speakers from Thales were graduates who were new to the company and best placed to advise new applicants and recruits. They presented themselves and the company as a legitimate aerospace engineering and transport company, with every mention of their defence industry it was swiftly followed by “this is classified information” allowing them to brush over the specifics without any detail. The only details which were revealed were that this department had the biggest budgets and “best Christmas parties”.

When questions were taken from the audience the speakers from Thales were asked to elaborate further on the work which is carried out in the defence sector. The response that was received went in to detail about a very specific project on SONAR for customers in Estonia, knowledge of other projects in the company was denied again on grounds of “classified information”. This created an impression that company workers were detached from their responsibilities and ethics on a ‘need to know’ basis.

They were then challenged on their knowledge of how their output was being used, whether they were fully aware of the outcome of their efforts or merely acting under instruction. The response given was that projects are completed to the brief set by the demands of the customer which include governments and private sector. To quote the speaker “any customer we can get our hands on”.

When further challenged on this issue, citing the selling of arms to oppressive regimes such as Saudi Arabia as an example the representatives insisted that there were rigorous procedures in place to stop this from happening, despite their earlier claim and evidence otherwise.

Thales representatives were then asked their opinion on the recent EU legislation banning arms exports to Saudi Arabia and how this might affect their business, particularly shrinking their defence sector. The response received was that “we are not an arms company” which was immediately challenged for being misleading on the basis that half of their profits come from this sector, selling to oppressive regimes such as Saudi Arabia and Turkey.

The good news from the event was that there seems to be very little desire among the student body to work for these types of companies, with a handful of CAAT activists making up half of the crowd matching the number of regular attendees. This sent out a strong message that arms companies are not desired, nor welcome, and have no place at our universities.