BAE Chairman Roger Carr’s visit to speak at the University of Southampton last week was met with fierce opposition from students and locals. Students from the university joined forces with Southampton Campaign Against Arms Trade to show their opposition to BAE Systems and highlight the links between the university and the destructive arms industry.

A lively protest took place outside while activists disrupted Roger Carr’s speech entitled ‘The Defence Industry, A Moving Target’. Michael Ambrose from the Southampton Students for Palestine group explained that the protesters were against BAE who sell weapons to countries like Saudi Arabia.

He said: “We believe the speech will be about BAE who have links with the university and who have representatives as part of the university’s wider programme for employment.

“This is not just about the speech but also about the university’s links with BAE.” 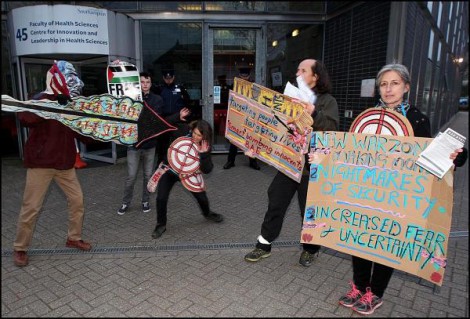