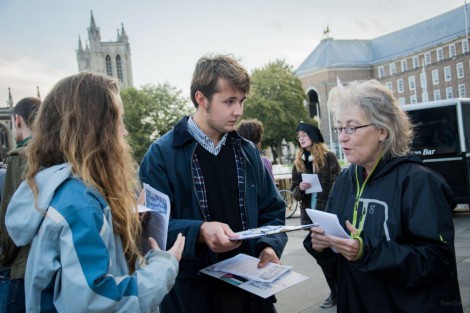 At a time when Bristol prepares to celebrate its Green Capital status in 2015, residents and UWE students were keen to show the business of death is not welcome in our city and staged a protest outside our City Hall where the event was being held. We engaged with the many passer-bys on the busy main street at rush hour, assisted by our couple of Grim Reapers and over 50 letters to the council were signed against the event being held in the council building.

As the demo was ending Bristol elected Mayor George Ferguson had the decency to come down to speak to us. Whilst refusing to give a concrete pledge to stop the council building being used for such talks in the future, Ferguson did admit to being “spiritually on your side” and welcomed a follow up conversation on turning Bristol’s “swords to ploughshares”. Bristol Against the Arms Trade have taken him up on this offer by writing a follow up letter requesting a meeting with him to turn his rhetoric into action.