Arms Companies not welcome at UWE 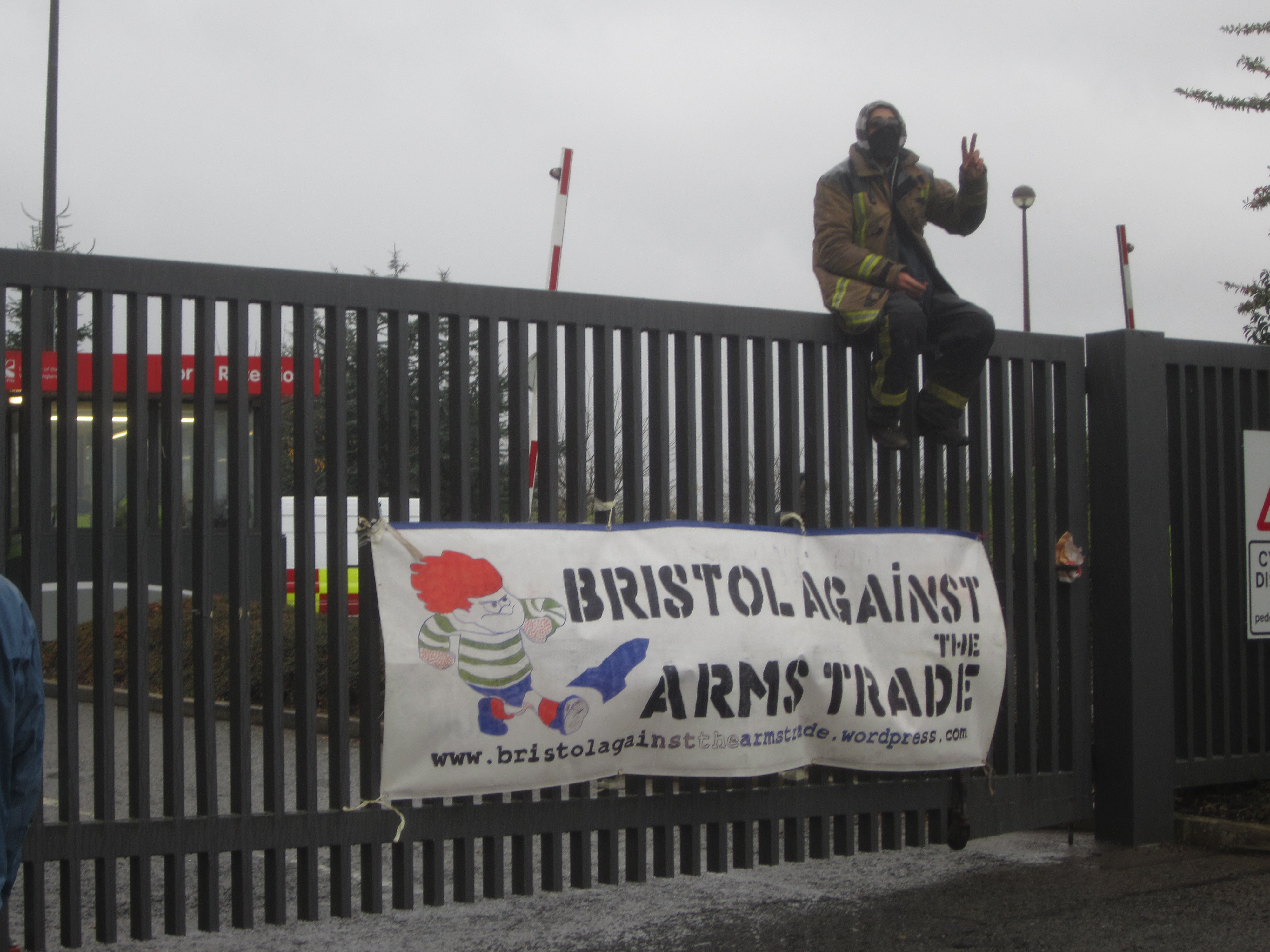 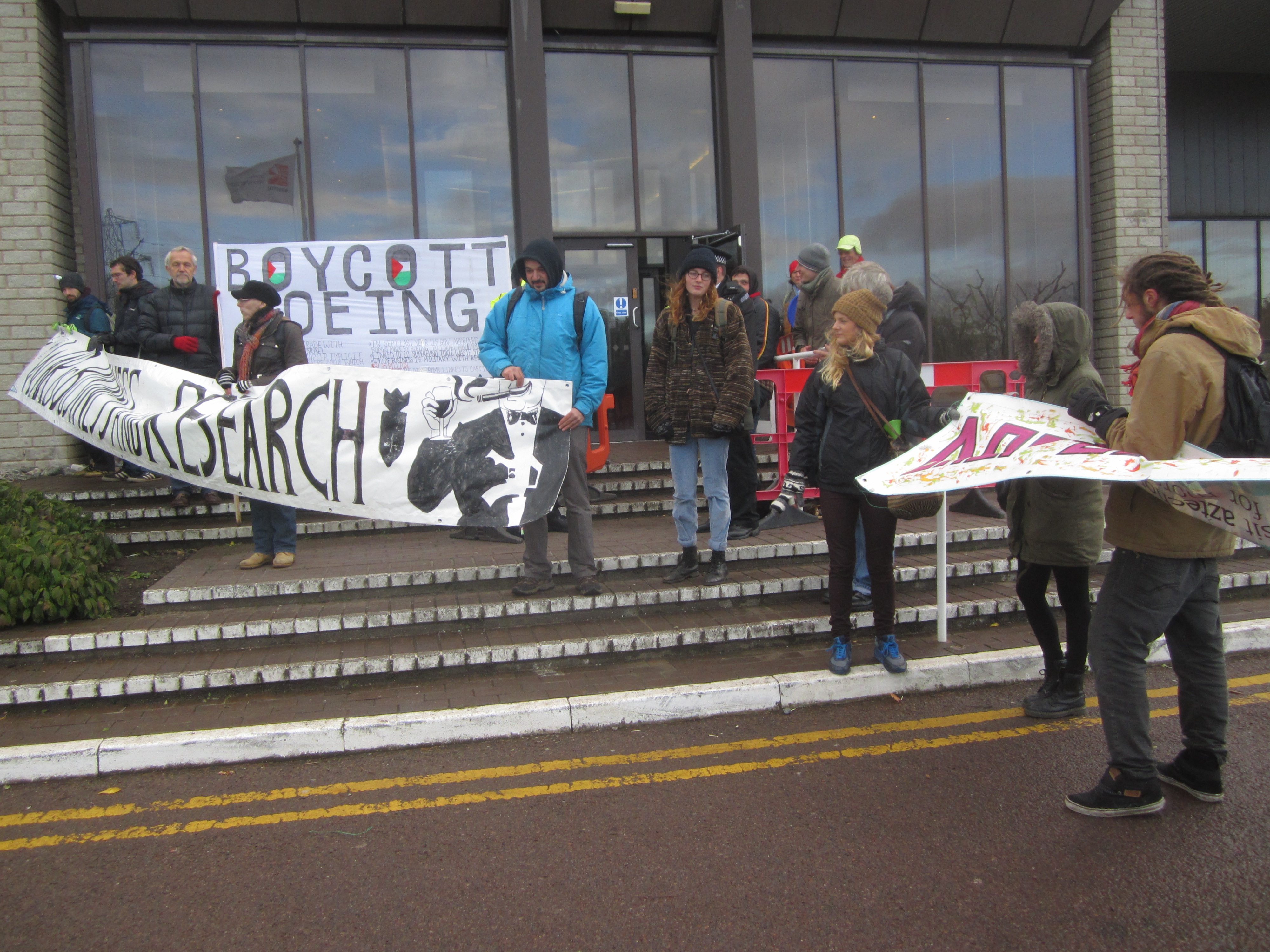 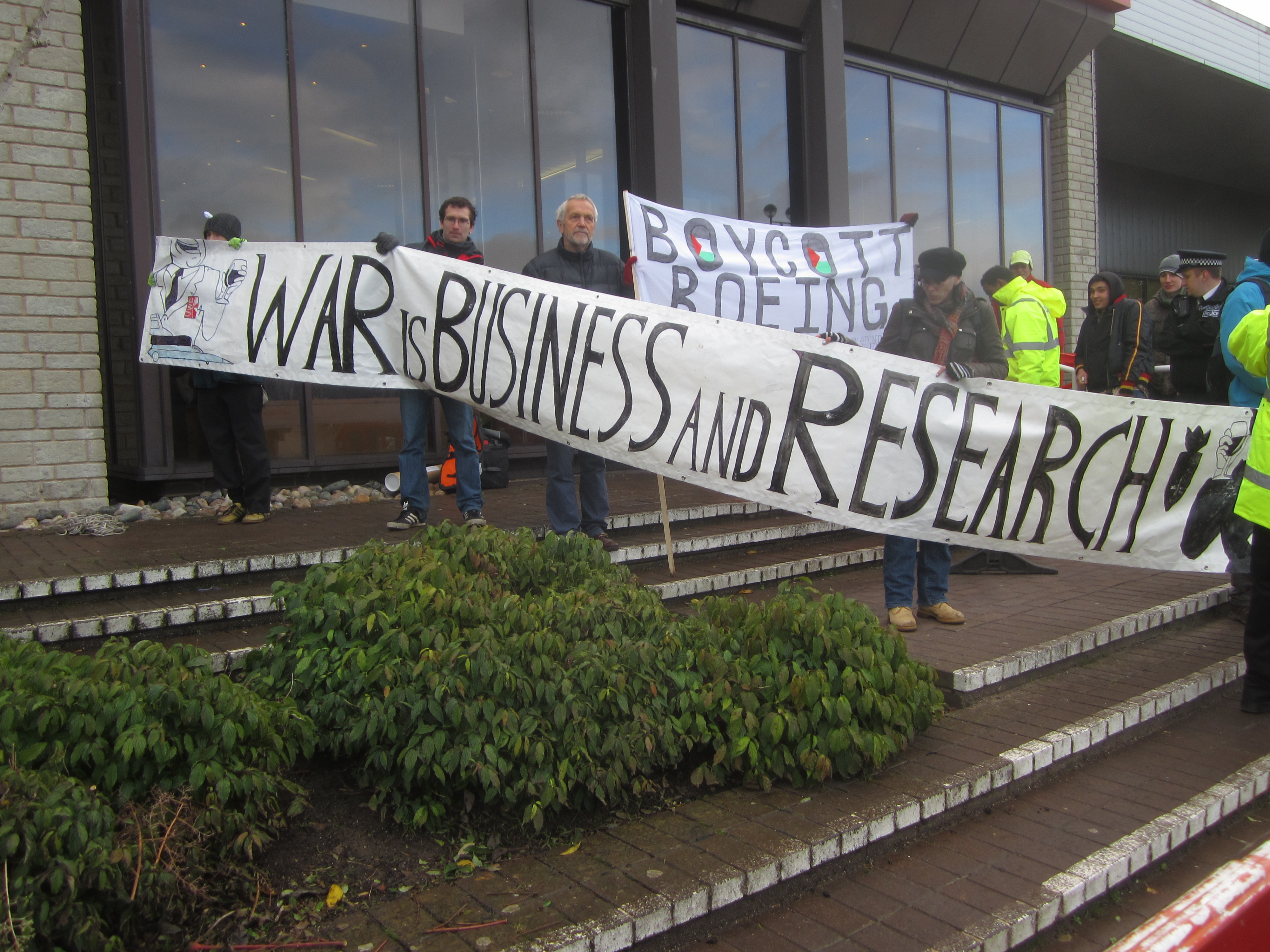 Update: The protest was successful! The DPRTE conference has been moved away from the UWE campus. Well done to everyone who was involved for your hard work!

Students of the University of the West of England joined forces with Bristol Against the Arms Trade yesterday to protest and disrupt the DPRTE conference, hosted by the university in the UWE exhibition and conference centre. Attendees included Babcock International, BAE Systems, Chemring, DSTL, Raytheon and UK Trade Industry Defence and Security Organisation.

Members of Bristol Against the Arms Trade released this statement:

Companies attending today’s ‘Defence, Procurement, Research, Technology and Exportation’ Event were greeted this morning by queues trailing back along the A4174 as protesters blocked the UWE North Entrance. One gate was eventually locked and attendees forced to use other entrances. Later as they approached the building attendees were accompanied to the door of UWE’s Exhibition and Conference Centre by protesters just letting them know who would be attending the event; the likes of Raytheon (cluster bombs in Iraq, missiles in Gaza), Babcock (nuclear submarines), Chemring (teargas used in the Arab Spring) and our good friends BAE Systems. Crowds of protesters gathered at the entrance to ensure that UWE were suitably embarrassed to be holding the event and that those entering were told they weren’t welcome on the campus or in our city. Some UWE students peacefully enter arms conference and staged a die-in. They were threatened with arrest for trespassing on their own university.
The protest continued around campus letting students know what was being held at their space and banners held at each entrance. Arms dealers and the likes of these companies will be greeted by the same response at future events at UWE.
See:
https://www.facebook.com/NOWMDatUWE
Petition to stop UWE’s investment and support of the arms industry: https://www.change.org/petitions/calling-the-university-of-the-west-of-england-uwe-bristol-not-to-invest-itself-into-promote-support-or-enable-profit-making-from-of-through-wars-military-uses-of-research-military-networks-and-violent-approaches-towards-conflicts

Professor Steve West, Vice-Chancellor for the University of the West of England, insisted the exhibition “is not an arms fair”. He said: “The exhibitors at this conference do not have any form of munitions, weaponry, artillery or hazardous military equipment on site. It is not University policy to support arms fairs. The conference and exhibition focuses on helping the management of procurement projects for the defence industry, a key sector in the British economy.”

University spokesman, Keith Hicks commented, “It is our policy not to support arms fairs. This is not an arms fair. This is a conference that promotes project management of large procurement projects and supply chain management. The University is also not a sponsor of the conference or involved besides the rental of the space.

To which the protesters expertly responded with:

Although Keith Hicks and Steve West are keen to assert that DPRTE is not an arms fair, they have either been naively sucked in by the arms industry’s misleading jargon, or are knowingly complicit in covering up the university’s vested interest in the arms trade.

The statement that it “promotes project management of large procurement projects and supply chain management” is true, but meaningless because it avoids saying what is being procured, and what the chain is supplying – a quick look at their website show that they themselves promote it as a “defence showcase”. Our concern is not that there were “munitions, weaponry, artillery or hazardous military equipment on site”, we were not concerned about being blown up or shot at on campus that day. Our concern is that companies producing such products, and other less obvious items, were meeting to continue ‘business as usual’, that networking at these events is a crucial step in the supply chain of products that end up facilitating and fueling war and destruction.

The DPRTE event invites corporations to network, share knowledge and “showcase the latest technologies”. The list of attending companies includes BAE (the world’s 3rd largest arms company) Raytheon (cluster bombs, guided bomb systems, tomahawks and other military equipment used in Palestine, Iraq and Lebanon) Roke Manor Research (who produced tear gas used in the Arab spring) and Babcock (who refurbished the UK’s nuclear submarine). Many smaller companies, who may not yet be producing weapons, are clearly attending in the hope of increasing their chances of getting profitable contracts.

Keith may be right in stating that UWE is not a sponsor of this conference – however, UWE has consistently showed its support of the arms industry – in March UWE sponsored the president of Boeing to give a talk; UWE has invited arms companies such as Airbus, Babcock and Boeing to its careers fairs and UWE’s engineering department is proud to play an “important part” in developing the global market of aerospace technology, and boasts “increasing activity” in Unmaned Aerial Vehicles (drones).

UWE’s willingness to rent it’s facilities to this event are yet another indication of its involvement in the arms trade and lack of ethical conscience. UWE students are starting to ask questions about their university’s relationship with the ams industry, and despite UWE’s attempts to keep this hidden, there is a growing student movement taking action.

Today is my last day working at Campaign Against Arms Trade! It’s been fantastic to have the chance to work with energetic and enthusiastic students all across the country who’ve been doing tons of great work to cut ties between their universities and arms companies. These have been some of the highlights of working at […]
“What about Yemen?” Leeds Students Shine a Spotlight on UK Arms Deals

Students from University of Leeds (UoL) Amnesty International Society are building support for their campaign against the arms trade on campus. Their campaign has focused on the UK’s role in arming Saudi Arabia, which has continued despite the brutal attacks on the people of Yemen. The Saudi bombardment has been central to the ever growing humanitarian catastrophe in […]
Campaign Strides at UCL and Newcastle University

Students at both University College London (UCL) and Newcastle University have pushed their campaigns for arms trade divestment forwards through motions of support at their students unions. Disarm UCL, which re-formed only recently, managed to get a motion passed unanimously in their student union. The motion calls for UCL to cut research and consultancy ties with […]