Students from University of Leeds (UoL) Amnesty International Society are building support for their campaign against the arms trade on campus. Their campaign has focused on the UK’s role in arming Saudi Arabia, which has continued despite the brutal attacks on the people of Yemen. The Saudi bombardment has been central to the ever growing humanitarian catastrophe in Yemen, which has killed over 10,000 civilians in two years.

The Saudi-led coalition have been condemned by everyone from the New York Times to the United Nations for attacking civilian targets such as hospitals, factories and even a funeral. Despite the Saudi attacks provoking outcries from numerous humanitarian groups, the UK has sold over £3.3 billion of arms to Saudi Arabia since the start of the conflict almost two years ago. Campaign Against Arms Trade recently took the UK government to court in a landmark case over arms sales to Saudi Arabia; a verdict is expected within the month. 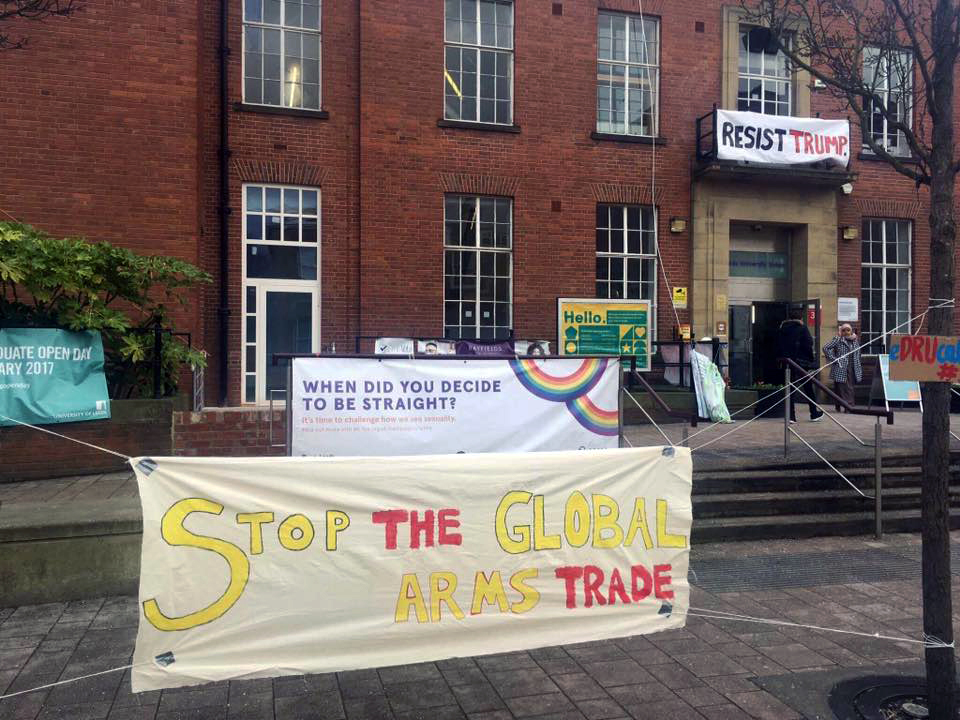 UoL Amnesty International Society have submitted a motion to their university to limit the influence of arms companies involved in alleged human rights abuses at university careers fairs. In their place, they call for stronger relationships with more ethical employers so that graduates can work in industries creating positive change, rather than death and destruction around the world.

As with many universities across the country, the University of Leeds has a sustainability plan, which includes commitments to contributing positively to civic society. The campaign seeks hold the university to their written aims; building towards a better future through supporting engineering students in entering renewable industries and developing sustainable technologies. 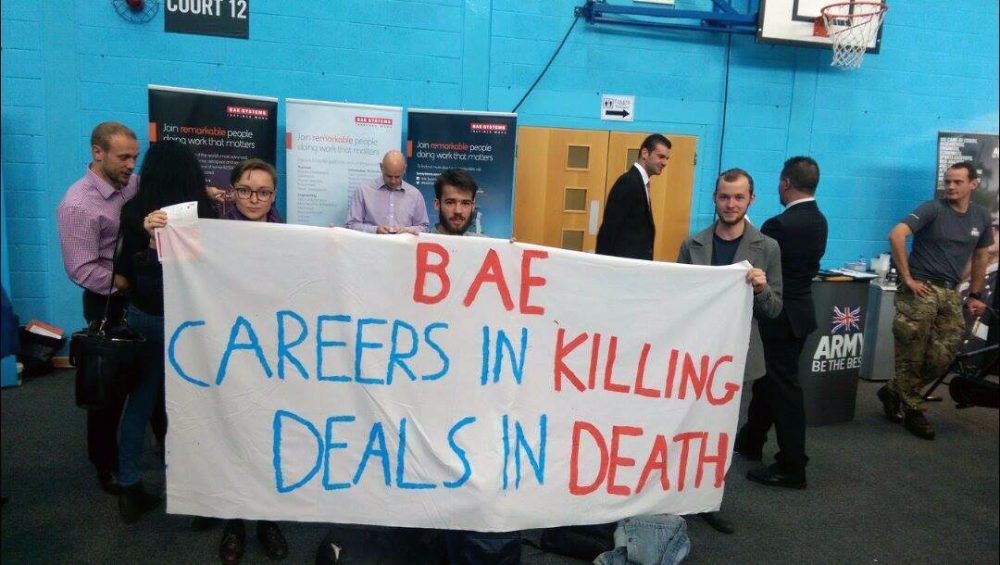 The recent campaign actions build on last years’ protest at a careers fair where campaigning groups, including the Amnesty group, disrupted BAE Systems’ stall to raise awareness of Britain’s role in the war in Yemen. The diverse mix of fundraising and educational events arranged by the group has included subvertising during the recent student union elections through placing banners in prime locations on campus.

To find out more about the campaign and how you can get involved in the action to get arms companies of campus, take part in a workshop run by Campaign Against Arms Trade this Thursday 6 – 7:30 pm. You can also get involved in drafting letters to be sent to local MPs asking them to bring up the crisis in Yemen in Parliament, or contribute to an educational zine on the arms trade. including articles, paintings, poetry and other creative works.

Recently, Jamal Khashoggi’s horrific death has meant that the UK-Saudi relationship has come under scrutiny; unfortunately much more than the scrutiny that has come with the death and destruction of the lives of millions in Yemen, and the ongoing human rights abuses for those living and working in Saudi Arabia and those affected by Saudi […]
Student Activist Weekender

The conference On the 1st and 2nd September, students from across the UK came together at Manchester University Student Union to collaborate and organise in their demands for their universities to stop arming, funding and supporting Israel’s ongoing occupation and colonisation of Palestinian land, human rights abuses, and breaking of international law. The educational weekend […]